MINNEAPOLIS — When Jack Richter was 22 years old, his world "came crashing down."

Richter, a student at the prestigious Eastman School of Music, had come out as gay to his mother. Soon after, he said his half-sister sat down beside him at home and opened her Bible, in which she had highlighted some verses.

Afterward, Richter said his sister gave him literature on how to become straight, which she said he needed to do in order to go to heaven. Richter dropped out of school.

Years later, Richter had never finished his music degree, but wore an Eastman School of Music sweatshirt as he testified before Minneapolis' Public Health, Environment, Civil Rights, and Engagement Committee, asking the city to ban the controversial practice of so-called conversion therapy on LGBTQ+ youth within city limits.

“The hard thing about the ex-gay movement is it leaves you with daily negative thoughts, and you still have to struggle with the years and years of indoctrination and propaganda that has been brought on you,” he said. 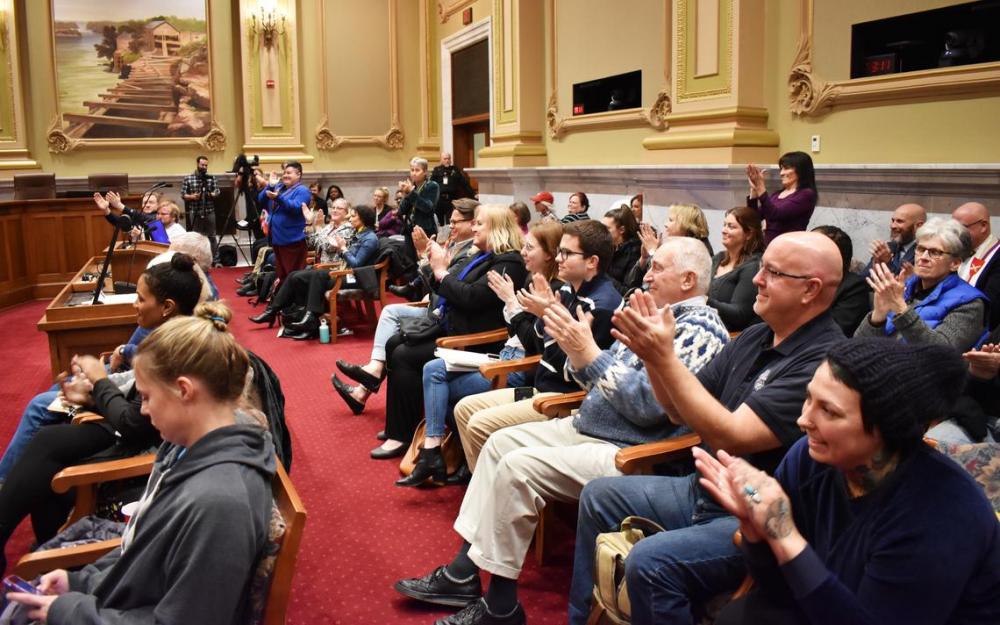 What is conversion therapy?

But it doesn't take starvation or electric shock to damage a young LGBTQ+ patient's health. The AMA writes that even the implication of conversion therapy — that homosexuality and gender nonconformity are mental disorders in need of treatment — are damaging to young people. Ultimately, the AMA says there is not medical or scientific evidence that therapy can change one's sexual orientation or gender identity.

At the Nov. 18 hearing on the bill, Cat Salonek, a policy and organizing director for LGBTQ+ advocacy organization OutFront Minnesota, said that with conversion therapy, "At best, people are trying to help kids."

"At worst, these kids are ending up dead," she said.

LGBTQ+ youth are already vulnerable. According to an August 2016 study by the Centers for Disease Control and Prevention, between September 2014 and December 2015, nearly 43% of LGB students in grades 9-12 surveyed had "seriously considered" attempting suicide, compared to about 15% of their heterosexual peers.

During the Nov. 18 hearing, Richter told the stories of two of his friends who killed themselves.

"These two young people had dreams and had goals for their lives," he said. "And that was completely snuffed out."

"At best, people are trying to help kids... at worst, these kids are ending up dead."

Minnesota state lawmakers during the 2019 legislative session considered a bill that would ban the practice throughout the state, but it ultimately failed in the Republican-controlled state Senate. Minneapolis marks the first city in Minnesota to have passed a conversion therapy ban, with similar legislation moving along in St. Paul, Duluth, Golden Valley and Saint Louis Park.

OutFront Minnesota plans to push for a statewide ban again in 2020. Without a statewide ban in place, parents could simply take their children out of Minneapolis city limits in order to receive conversion therapy.

Minneapolis' Ward 4 council member Phillipe Cunningham, who championed the city's ban, said before Friday's vote via written statement (he was absent due to family emergency) that "legislators made this effort about partisan politics, rather than protecting our kids" last session.

Justin Lewandowski, a policy and community organizer with OutFront Minnesota, said the question of whether to ban conversion therapy should not be up to party politics.

"With the climate we're in politically right now, this shouldn't be an issue that we bat around for political points," Lewandowski said. "This is just something that's the right thing to do. It's the humane thing to do and people need to put aside whatever's holding them back from voting with us on this."

To the west, neither North Dakota nor South Dakota appear to be taking up the issue in the foreseeable future. Human Rights Campaign lobbyist Roger Tellinghuisen said if anything, South Dakota is likely to see similar LGBTQ-related legislation in 2020 as in recent sessions: transgender bathroom bills, requirements for transgender athletes to compete according to their "birth sex," parental rights to refuse transitional treatment to their transgender children and more.

North Dakota's next legislative session will not convene until 2021. During its 2019 session, both the state House and Senate struck down bills that would have banned discrimination based on sexual orientation.

To the east, Wisconsin has not passed a statewide ban. At the local level, seven cities — Milwaukee, Madison, Eau Claire, Cudahy, Shorewood, Racine and Sheboygan — have banned conversion therapy on minors.

Cunningham on Friday said he's hopeful that the Minneapolis vote sends a message to Minnesota lawmakers that it's time for a statewide ban.