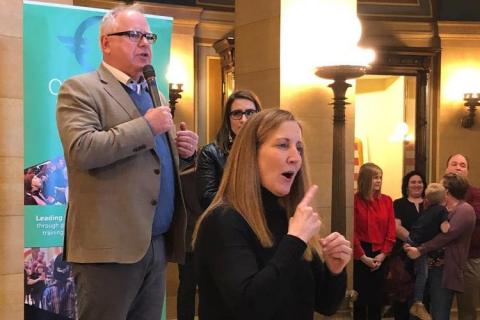 Gov. Tim Walz and LGBTQ activists celebrated Valentine’s Day with a rally to demand that the Republican-controlled Minnesota Senate pass a ban on “conversion therapy” for minors.

The ban has been introduced in the legislature by a pair of LGBTQ legislators, Rep. Hunter Cantrell, DFL-Savage, and Sen. Scott Dibble, DFL-Minneapolis. They say the ban is needed to protect children from widely discredited and dangerous practices.

Local legislators, including Sen. Rich Draheim, R-Madison Lake, and Rep. Todd Lippert, DFL-Northfield, indicated they're supportive of the idea, but Draheim said he wants to be careful about what any ban would encompass.

According to a 2018 analysis produced by the Williams Institute at UCLA, about 700,000 LGBTQ persons have recieved some form of “conversion therapy.” In the U.S., the practice dates back more than a century.

Currently, counseling is the most common form of “conversion therapy,” but other practitioners have used more aggressive techniques, such as nausea and vomiting or electric shocks in an attempt to create “aversion.”

By promoting the idea that being part of the LGBTQ is wrong and can be “cured,” LGBTQ advocates worry that “conversion therapy” stigmatizes LGBTQ people and adds to already high rates of suicide and mental health issues among the LGBTQ community.

Roger Sanchez, an activist with the LGBTQ civil rights group OutFront Minnesota, described himself as a survivor of conversion therapy. Sanchez said he grew up thinking something was wrong with him because he was gay, so he agreed to undergo conversion therapy - a decision that haunts him to this day.

“I was brainwashed to believe that being LGBTQ was wrong. My rainbow at that time was drained of its color. I smiled but inside I was dying," Sanchez said. "However, in college I connected with LGBTQ-affirming students. I realized I wasn't alone in my struggle. They are the ones who helped me accept myself.”

In 2012, California became the first state in the nation to ban “conversion therapy.” Since then 18 states and Washington DC have followed, along with dozens of municipalities across the country.

The proposal passed the DFL-controlled House last year, with Rice County’s own Rep. Lippert as a co-sponsor. Some Republicans indicated a willingness to support the bill, like Sens. Scott Jensen of Chaska and Eric Pratt of Prior Lake.

Other Republicans, including Senate Majority Leader Paul Gazelka of Nisswa, are opposed to the bill. Gazelka’s daughter Genna, who identifies as bi-gender, has blasted her father’s stance, describing “conversion therapy” as “tantamount to torture.”

With the Republican majority unwilling to bring a standalone bill to a floor vote, it was offered as an amendment to the Health and Human Services Bill. However, that gambit failed as several Republican Senators threatened to vote against the entire bill if the amendment were attached.

“The way it was originally drafted, you as a parent could be charged for sending your kid to someone to have a conversation,” he said. “It wouldn’t just apply to the ‘therapy,’ which I think most have problems with.”

In recent months, Duluth and Minneapolis passed their own ordinances banning “conversion therapy.” Dibble and Cantrell say they plan to make another push for the bill this session, although they acknowledge it won’t be easy with Republicans in control of the Senate.

Even with all of those challenges, Lippert expressed optimism that the bill might have a fighting chance in the upcoming session.

“The vote in the Senate was very close, and all indications were it was a very difficult vote for some members,” he said. “I think with more conversation this session, it’s possible that the bill might be enacted.”

The cause has a strong supporter in the Governor’s Mansion. A longtime supporter of LGBTQ rights, Walz helped found a Gay-Straight Alliance at Mankato West High School when he was a teacher and has supported same-sex marriage since his first run for Congress in 2006.

“The idea is that this absolutely discredited, byzantine, torturous way of telling our children they are not who they are has got to end and will end,” Walz said.