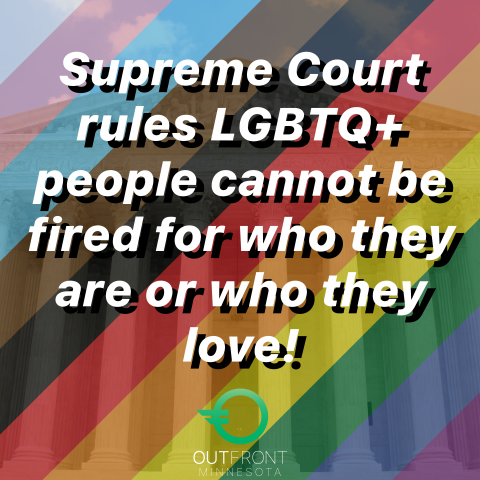 [Minneapolis] This morning the Supreme Court of the United States affirmed that Lesbian, Gay, Bisexual, Transgender and Queer (LGBTQ+) Americans deserve the full rights and dignities enshrined in our Constitution and the 1964 Civil Rights Act.

This is an important moment for legal equality. Today, millions of LGBTQ+ Americans awake to the assurance that they cannot be fired for who they are or who they love.

The Supreme Court ruled that companies do not have a right to discriminate against LGBTQ+ people in the workplace. This historic decision holds firm that LGBTQ+ people are, and should be, protected from discrimination under federal law.

In the midst of the COVID-19 health crisis and an uprising demanding an end to systematic racism and police brutality sparked by the death of George Floyd in Minneapolis, these decisions are heartening and encouraging, but our work is far from finished.

Violence against the trans community — and especially Black trans women — is an epidemic and it must be stopped. Our nation has much to do to dismantle both legal and cultural systems of racism.

While LGBTQ+ people now have legal protection from discrimination at work, we still have a long way to go to ensure that “We the People” actually includes every person in this country.

In the middle of our current health crisis, it’s scary to think that people could be denied the medical care they need when they need it because of Trump’s decision to remove Obama-era protections for trans people in healthcare. LGBTQ+ Americans live with this fear even in the best of times, and that’s why we need to make sure no American faces discrimination or is denied services simply because of who they are.

We need Congress to fully protect LGBTQ+ people from discrimination and pass full federal non-discrimination protections. But that’s just part of what is needed to achieve true equality.

Our nation, at every level, needs to address the racism that perpetuates discrimination and violence against Black people — and all people of color, including those who are LGBTQ+ — even when such discrimination and violence are formally prohibited by law. Even with today’s decision, Black LGBTQ+ people will still face disproportionate discrimination across their lives. Until our laws remedy systemic racism and inequality, and our culture catches up to those laws, our movement’s pursuit of LGBTQ+ equality is far from done.

Today’s decision is an important step forward. It is a powerful reminder of how much work is left to do, and how critical that work remains.

OutFront Minnesota is the state’s largest LGBTQ+ civil rights organization. OutFront’s mission is to create a state where lesbian, gay, bisexual, transgender, and queer people are free to be who they are, love who they love, and live without fear of violence, harassment or discrimination. For more than 30 years we have led the way toward LGBTQ equity.