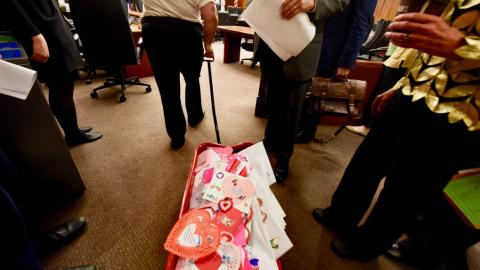 And opponents of the ban pressed lawmakers as well, armed with a First Amendment argument and testimonials from those who say “heterosexual-based counseling” helped them choose to live without acting on their same-sex attractions.

The issue is a major rallying cry for gay rights groups this year — and a unifying issue for social conservatives as well.

Let’s break it down.

WHAT WOULD BE BANNED

The proposal, labeled “protection from conversion therapy,” seeks to regulate paid services “by a mental health practitioner or mental health professional … that seeks to change an individual’s sexual orientation or gender identity, including efforts to change behaviors or gender expressions or to eliminate or reduce sexual or romantic attractions or feelings toward individuals of the same gender.”

For people under 18, the practice would be completely outlawed. It also would be banned for people classified as vulnerable adults.

For those older than 18, here’s how state Sen. Scott Dibble, DFL-Minneapolis, the lead sponsor in the Senate, put it: “If you’re an adult, it’s a free country, but it has to be disclosed that this has been discredited.”

The bill also ensures that Medical Assistance, the state’s version of Medicaid, would not cover such services.

WHAT WOULD NOT BE BANNED

If no money is involved and no medical or mental health claims are made, the proposed restrictions wouldn’t mean anything. Religious rhetoric inside a church would still be protected.

In other words, a Sunday school teacher could tell children that homosexuality is wrong, a disorder, and should be cured. That’s according to several people interviewed by the Pioneer Press both for and against the proposal.

Fundamental to supporters of the ban is the idea that gay or transgender people are simply that way — and in the words of many who spoke Wednesday, “perfect” that way. It’s not a disorder in need or a cure, or a perversion in need of avoiding.

Beyond that, they argue, attempts to counsel someone, especially children, away from homosexuality are dangerous and harmful.

“It was like hypnosis,” said Will Bernstrom-Sampson, an elder at Apple Valley Community of Christ church, who said he underwent such treatment in his youth when he was outed as gay and expelled from a private Christian school. “I was told constantly that I was a danger to other people.”

Roger Sanchez, another self-described “survivor,” said that his two years of therapy to “cure” him from being gay led him to dark places of shame and prompted him to contemplate suicide.

Junior Avalos said he was beaten while attending a two-week conversion camp in Texas. “I was treated more like a dog than a 16-year-old,” he said.

Supporters of the ban say such practices continue today.

THOSE AGAINST THE BAN

Those opposed to the ban argue it’s too broad, it’s unnecessary — and, according to some, the therapy can work.

Moses Bratrud, spokesman for the Minnesota Family Council, said that the ban could be interpreted to mean that authors who espouse the belief that gay behavior should be suppressed are prevented from selling their books or being paid for speaking engagements.

He also echoed sentiments of other opponents that the entire term “conversion therapy” evokes practices of the past, not the present.

Several people said they underwent counseling in response to being attracted to the same sex — and were thankful for it.

“I was not forced, I was not coerced, and I was not abused,” said Nate Oyloe, who told lawmakers his therapy resulted in him living out a fruitful heterosexual life.

Luca Jo Groppoli told lawmakers her story: As a girl, she was molested, which prompted her to hate her femininity and desire a sex change. But when she began to transition, it didn’t feel right. She became a lesbian, but sought counseling, eventually resulting in now being a straight woman. She described the counseling as “compassionate.”

Several opponents said the ban would impinge on various forms of free speech — an idea disputed by Ben Feist, legislative director of the ACLU of Minnesota.

On Wednesday evening, a House committee approved passed the ban in a largely partisan vote, with Democrats supporting and Republicans opposing.