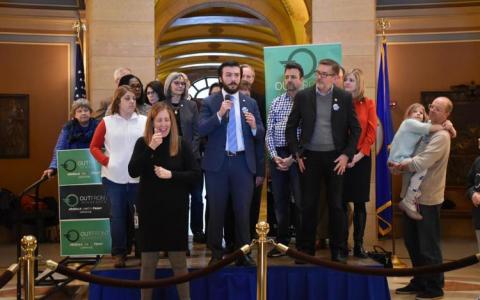 ST. PAUL — A group of dozens rallied at the Minnesota Capitol Friday, Feb. 14, as part of the latest push to outlaw conversion therapy for minors.

State lawmakers this year are set to take up a proposal to ban counseling aimed at changing a minor's sexual orientation or gender identity. The measure passed the Minnesota House of Representatives in 2019, but failed in the Senate.

Advocates this year say they're hopeful that they can pick up the votes needed this year to outlaw the practice in Minnesota. Nineteen states have enacted similar bans and at the local level, St. Paul, Duluth, Golden Valley and St. Louis Park have considered similar bans.

Supporters of the ban include LGBTQ, medical and mental health organizations who argue the therapy doesn't change a young person's sexual orientation or gender identity and can lead to "significant psychological distress," depression, anxiety, self-blame, lowered self-esteem, sexual dysfunction and more. Some religious groups that oppose the ban, meanwhile, say the proposal could limit a therapist or minor's right to free speech or freedom of religion.

Lawmakers, those who'd experienced conversion therapy, LGBTQ allies and others filled the rotunda Friday to demonstrate support for the ban. And they made Valentine's Day cards for lawmakers in an effort to thank those pushing the bill for their support and to win over those who'd been on the fence about the measure.

The American Medical Association defines conversion therapy as "any form of interventions which attempt to change an individual’s sexual orientation, sexual behaviors or gender identity." And the AMA along with other medical groups have condemned the practice.

AMA research indicates that there's no evidence that therapy can change a person's gender identity or sexual orientation.

Roger Sanchez, who went into conversion therapy after his family found him to be too effeminate at a young age, said he still feels the negative side effects of conversion therapy. And he said he hopes no other Minnesotans will have to endure a similar experience.

"I was brainwashed to believe that being LGBTQ was wrong, my rainbow at that time was drained of its color," Sanchez said. "I smiled but inside, I was dying."

Gov. Tim Walz and Lt. Gov. Peggy Walz at the event committed to getting the proposal passed during their administration. And legislators who carried the bill in 2019 said they'd again push to get it enacted in 2020. The measure is set to come up for its first House committee vote on Tuesday.