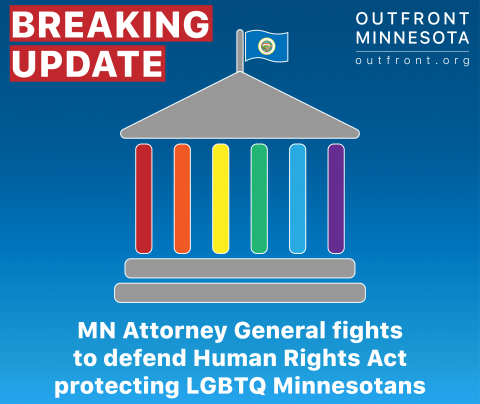 With one of the most comprehensive human rights acts in the nation, Minnesota has become a target of the Arizona-based Alliance Defending Freedom, which filed suit with the intent of carving out exemptions to the very law that currently protects all Minnesotans from discrimination in businesses that offer goods or services to the public. The case involves a St. Cloud couple who claim that the decades-old MHRA violates their freedom of speech by not allowing them to deny business services to people whose marriage doesn’t align with their own religious beliefs. If successful, the couple will be exempt from the legal consequences for violating the MHRA.

Human rights advocacy groups from across Minnesota have come forward to stand with Commissioner of Human Rights Rebecca Lucero, including:

“This lawsuit is not about wedding videos. At the heart of the debate are our values and we know that the majority of Minnesotans support treating others fairly and equally. Additionally, we have strong laws in Minnesota to protect the freedom of speech for business owners. Businesses that serve the public should not be granted a license to discriminate against some of the public. Regardless of different beliefs, what’s important is that we focus on what we have in common: taking pride in our work, respecting our coworkers, serving customers and getting the job done.”

“LGBTQ people are our fellow congregants, our friends and family, our neighbors and coworkers. They are part of our community and should not be turned away when they walk into a business that is open to the public.”

“While ADF fails to understand Minnesota’s proud history and long legacy of standing against discrimination, Minnesotans know that the our human rights act has guaranteed all of us protection from discrimination for over 30 years -- and we won’t stand by while an out-of-state organization attempts to usher in an era of legalized discrimination by carving out exemptions to it.”