One of our most important activities at OutFront Minnesota is fostering an informed voting community. Through conducting voter registration & voter pledge campaigns, surveying candidates for public office, pre-election phone-banking, holding voter rallies, and publishing voter guides, OutFront Minnesota has encouraged high levels of voter turn out amongst the LGBTQ and allied communities in recent elections.

One important way in which LGBTQ Minnesotans have a voice at the Legislature is through our annual Lobby Day for LGBTQ Equity, at which constituents from across Minnesota come to the Capitol to meet with their representatives. Through face-to-face, grassroots lobbying, LGBTQ and other fair-minded Minnesotans are able to participate directly in the legislative process.

As the leading LGBTQ organizing and lobbying organization in Minnesota, we help write and develop policy — in coordination with lawmakers — based on the experiences and concerns of our members. We know that direct, grassroots lobbying has the power to create a better and more inclusive Minnesota.

Our goal is lived equity for ALL Minnesotans.

Teamwork Is The Key!

OutFront Minnesota is a team of dedicated professionals…and YOU are the most important member of our team! It is your input that gets the legislators' attention, and, without you, all our efforts will be in vain. Securing human rights for lesbian, gay, bisexual, transgender, and queer Minnesotans requires all of us working together.

Join us! OutFront Minnesota is thrilled to bring back our annual day of advocacy on Wednesday, April 6th, starting at 12:00pm. After having to pause this event over the last few years, we couldn't be more excited to bring it back- and there couldn't be a more critical moment.

This year, Lobby Day will take place on the steps of the state capitol as a public demonstration of our movement's strength. We will feature speakers and storytellers as we call our activist network to action in passing the Mental Health Protections Act and opposing the multiple bills intended to rescind and damage LGBTQ+ rights.

Registration through the form below is requested.

Thank you to our generous Lobby Day hosts!

If you're interested in making a gift towards our political advocacy efforts, consider becoming a Lobby Day host! All host benefits can be found here- use this link or email anne@outfront.org to give your gift today!

“Conversion therapy,” often referred to as “reparative therapy,” “ex-gay therapy,” or “sexual orientation change efforts,” includes a range of dangerous and discredited practices aimed at changing a person’s sexual orientation, or efforts to change a person’s gender identity or expression. These harmful practices are based on the false claim that being Lesbian, Gay, Bisexual, Transgender, or Queer (LGBTQ+) is a mental illness that should be cured.

Unfortunately, many LGBTQ+ Minnesotans are still coerced and subjected to these harmful practices, which put them at risk for serious harms such as depression, substance abuse, and suicide. As an organization, we are working to end this harmful practice in our state and celebrating everyone's #RightToBe!

On July 15, 2021, Governor Tim Walz and Lieutenant Governor Peggy Flanagan signed an Executive Order 21-25 to ban "Conversion Therapy" in Minnesota, protecting LGBTQ+ minors, vulnerable adults, and their families from this discredited practice. This executive order does so much to protect LGBTQ+ community members but we can do so much more. We still need to close the gap and sign into legislation a complete ban on "Conversion Therapy". Our Mental Health Protections Act bill will do that! Please follow us to stay updated and contribute to this fight! We couldn't have gotten this far with you.

The Mental Health Act (MHPA) is a bill that OutFront Minnesota is supporting that will protect LGBTQ+ people from dangerous and discredited practices aimed at changing one’s sexual orientation, including efforts to change gender identity or expression. This bill will prevent mental health care providers in Minnesota from practicing conversion therapy. This legislation will:

While we cannot know the precise number of those who have been subjected to these practices in Minnesota, we know of multiple cases of LGBTQ+ people experiencing attempts to change their identity within our state. As of Dec 2021, 20 states, the District of Columbia, Puerto Rico, and more than 75 cities nationwide have restricted this harmful practice. On July 15th, 2021, Governor Walz signed an Executive Order that banned state funding from going to conversion therapy, although this did not ban the practice of conversion therapy altogether. Minnesotans have the chance to continue leading on LGBTQ+ rights by passing the Mental Health Protections Act. 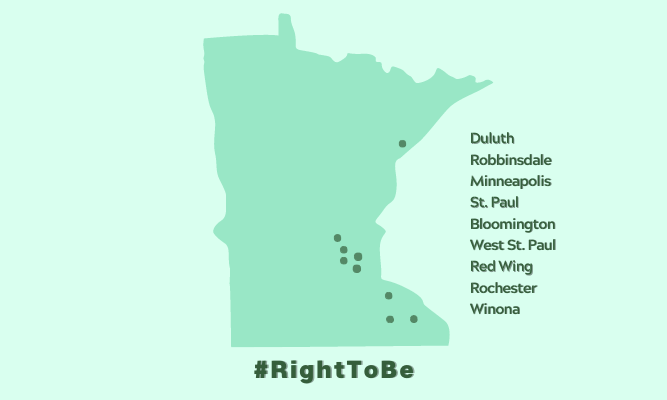 “[The APA] advises parents, guardians, young people, and their families to avoid sexual orientation change efforts that portray homosexuality as a mental illness or developmental disorder...”

"As the President of a Christian Seminary serving students entering various forms of ministry, I am compelled to speak out in support of outlawing the unchristian barbaric practice known as conversion “therapy”; a practice that has as its goal, converting all to a heterosexual orientation and cisgender identity. As the Clinical Director of a mental health crisis intervention service and a mental health clinician I see the deep emotional trauma caused by such practices as it gets expressed through suicidal thoughts and behaviors, depression and chemical dependency."