A Q&A with Kelly Holstine: on advancing educational equity for LGBTQ students 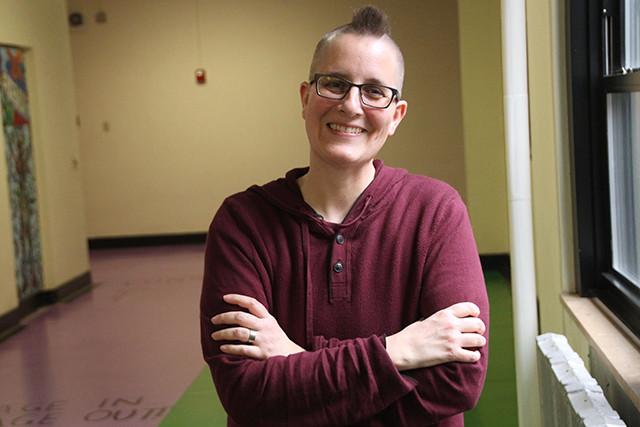 Riding a wave of celebrity that came with the designation of 2018 Minnesota Teacher of the Year, Kelly Holstine still honors requests for local keynote addresses. She also fits in travel to fulfill her national duties as a state Teacher of the Year, which extend through 2019.

Last week she delivered a Ted Talk in New York and addressed educators at the MEA conference back home. Then she scheduled a classroom visit for Monday with an English teacher who’d invited her to model a lesson on teaching students about pronouns.

In her new role as director of educational equity for OutFront Minnesota, an LGBTQ advocacy group, Holstine will continue to spend time in the classroom. She’ll also spend time helping educators create more inclusive learning environments — by doing things like including LGBTQ authors in the curriculum, creating gender-neutral bathrooms, and asking students to line up according to their birthday month rather than by gender.

After 12 years of teaching, Holstine switched to advocacy work to further expand her impact. She has her sights set on improving school climate and outcomes for some of the state’s most marginalized students: LGBTQ youth.

According to the 2019 Minnesota Student Survey, LGBTQ students are three times as likely to say they’ve seriously considered attempting suicide and four times as likely to attempt suicide as their heterosexual peers. Transgender students in the 11th grade are the most likely to attempt suicide. And 42 percent of these students say they have attempted suicide, compared to 9 percent of their cisgender peers in the same grade.

Ahead of the new student survey release, MinnPost sat down with Holstine at her office in Minneapolis to learn a bit more about her own experiences navigating the education system as a gay student-turned-teacher, and about her new efforts to improve school safety and mental health for LGBTQ students across the state.

MinnPost: Do you think you’re better suited to support LGBTQ students in your current role?

Kelly Holstine: I don’t know if it’s better or worse. I think it’s different. As a teacher, I was able to directly support individual students and groups of students. At the two mainstream schools I was at before Takota Learning Center, I had GSAs (Gender and Sexuality Alliances) — so I was able to provide support groups for students. And at Takota, every day we would have flex schedule, where we could have sessions with different titles, and I would try to lead sessions related to LGBTQ students. Now, I’m still an educator — it’s just that my classroom got bigger. I’m able to help support educators with their work with LGBTQ students: how to be there for those folks, how to answer questions, how to provide support, how to start GSAs, and how to include LGBTQ curriculum.

MP: How do you approach this work in a way that doesn’t overwhelm …

KH: … my spirit? I’ve been here three months. So I do think I’m still trying to  figure that out. But I definitely have a vision that I’m trying to follow — which is to involve all of the stakeholders in the process: policy makers, administrators, superintendents, school boards, educators, students, paras. And we have a youth advisory council. It’s definitely not a small task. But I feel excited at the opportunity to try and make schools safer for our LGBTQ humans — both educators and students.

MP: How do you build inroads in school communities where you know there’s an unmet need that LGBTQ students have, but the community isn’t as receptive?

KH: I think it’s starting with the folks in those communities who are ready and who are looking for that support, because sometimes they might be just one, or be one of a few. I have noticed that some districts feel more comfortable having me come in as Teacher of the Year — so trying to build those relationships and helping educators see I’m not coming in with a desire to judge or to put people down or to question their past behaviors. I get that there has to be that level of safety there. It’s vulnerable to not always be the expert in something. And it’s vulnerable to have to learn something that’s new to you.

MP: Can you give an example? When you are inside a school, what’s a common training that you do?

KH: There’s the LGBTQ+ 101 and intersectional equity training. It’s a 90-minute training with educators, school boards, administrators — whoever wants to come to the table. It’s teaching concrete strategies about how to make classrooms in schools more LGBTQ+ inclusive. It’s also teaching terms about identities and orientations. So we’re going over specific terms. But we’re also taking some time to process that to process: What does gender mean for us as individuals, for kids?

MP: Do you care to share a bit about your experiences as a student, growing up?

KH: I was a tomboy as a kid. I’m from a small community in southern Minnesota. And I got picked on a lot. I had some really supportive teachers and some supportive friends, but there were some folks that were afraid of things they didn’t understand. And so I got bullied quite a bit — kicked and beat up and spit on and called names. That was tough. So teachers are the ones who made me feel safe. I’m sure that contributed to my desire to want to create such a safe place for kids.

In high school I wasn’t allowed to be a tomboy anymore. My parents decided that wasn’t an option. So I had really long, curly, blonde hair and was super feminine looking. So my external was feminine and the bullying decreased. But my depression increased. And that was really a difficult time for me — to be in feminine drag and to not identify with that as an external gender expression.

I went to college. My freshman year, one of my best friends came out as gay. So I became an ally and learned everything I could to support him. Sophomore year, I was in Ireland on a J-term, looking out over the Cliffs of Moher, and I had that “ah-ha” moment. I realized that I had a crush on someone on the trip. It was like all of these puzzle pieces connected at that moment. Everything made sense. The next day we were in Galway and I got my hair cut short, and started wearing glasses, stopped wearing makeup. I was playing this part and then I got to be me again.

MP: So that’s always been a part of who you were, as an educator, as well?

KH: I took an education class in college and actually did very poorly in the class because it was an elementary ed class that was all multiple choice tests. Also, it took me so long to figure out my orientation and then to be out. What I was hearing is it was really hard to be an out teacher. I was thinking: “I can’t go back into the closet. I just can’t do it.” So I ended up majoring in communications and worked in TV and media. Then I got into social services. Then in my 30s I was working in the field of child sexual abuse. After doing that for a couple of years, I started to feel like it really impacted my hope — to hear those stories and feel that pain these kids were feeling. I wanted to be part of the whole picture. I wanted to do more preventative work. That’s when I decided I was ready to be an out teacher. So I went back and got my teaching license in communication arts and literature.

MP: As a teacher, you advised a couple of GSAs. What are the sorts of things these student groups are doing in schools that are so impactful?

KH: It used to be the GSA was the Gay-Straight Alliance. Now it’s the Gender and Sexuality Alliance. And some people call themselves SAGA — which stands for Sexuality and Gender Alliance. There could be social components. Making sure that folks don’t feel isolated is really, really important — and that they feel supported, understood, that they feel that their identity is not just tolerated, but celebrated. When I was a GSA leader, we’d go roller skating, we went to the Pride parade. Some LGBTQ students feel, depending on where they live, that some of those social opportunities are more challenging if you’re one of the only ones. There’s a group that does a queer prom. OutFront, with the help of other organizations, puts on an event called Youth Summit in the spring and we meet with legislators. There are a lot of GSAs interested in policy work.

MP: How else are you working to improve school environments for LGBTQ students?

KH: I know of at least five districts that have passed a gender inclusion policy (ISD 622, St. Paul,  Minneapolis, St. Louis Park and Richfield). I’m really hoping to support districts in that work because just having a gender inclusion policy communicates to your students that you want to provide a safe environment for them to learn. It’s education around policies. It’s support around how do you help your students who are being bullied. It’s support around how do you help your students who are figuring out who they are? It’s support around adding LGBTQ curriculum so kids can see themselves in the curriculum. It’s support around helping teachers work with their own implicit and explicit bias, so students don’t feel they’re being discriminated against. It’s working with curiosity over judgment. There’s a lot of work to do and a lot of support that I’m hoping our program can give.

MP: Are there less publicized LGBTQ issues that you want to flag?

KH: I think graduation rates. We’re not tracking that right now. We are tracking it for race, and Minnesota has one of the worst opportunity gaps in the nation. It’s hard to track, because not everyone’s going to disclose. But I would guess that the graduation rate for LGBTQ kids is also really low. That’s a huge issue. If you don’t have your high school diploma, you’re very limited in your options. Also, there are five states now where it’s mandated that teachers have to include LGBTQ curriculum. I would love Minnesota to be one of the next ones. What that means in these states is that teachers have to include LGBTQ folks and history in their curriculms. If you’re in a history classroom and you’re talking about American history, you’re also gonna talk about the LGBTQ movement. In English class, you’re going to have authors and characters who are LGBTQ. In health ed and sex ed, you’re also going to be talking about what that means for people who are LGBTQ.

MP: Is there anything else you wanted to talk about, or let folks know about?

KH: I just think it’s really helpful for folks to realize that they have LGBTQ people in their life, even if they don’t realize it, especially in school. You have LGBTQ students — statistically, at least 10 percent. You have LGBTQ educators in your school. My hope is that we can get even more folks to accept and celebrate people that are already in their community — as a way to decrease isolation, increase opportunities for students and teachers to thrive. My definition of educational equity is finding out what students need academically, social-emotionally and everything in between and getting it for them. And that’s what this is about for me: educational equity. And it’s skills building. If you can learn how to do that for folks who are LGBTQ, then you are going to be better at it with folks from different races and cultures, and with kids with disabilities and mental health issues.