Star Tribune: Former Minnesota Teacher of the Year to move into LGBT advocacy in schools 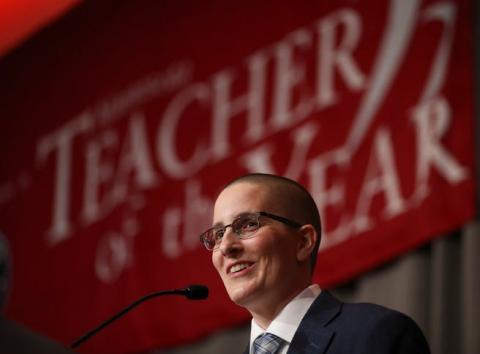 Bringing Kelly Holstine on staff to continue that work is the next step in building the best possible school environments for all of Minnesota's youth, including, and especially, our LGBTQ students.

Minnesota's 2018 Teacher of the Year has stepped down from her teaching position to take on a new role: expanding the work of the state's largest LGBT rights organization in schools.

Kelly Holstine, who previously taught English at Tokata Learning Center, an alternative high school in Shakopee, will now serve as director of educational equity for OutFront Minnesota, according to a news release issued Monday by that organization.

Holstine is the first openly LGBT teacher to win recognition as Teacher of the Year, and will now focus on leading training sessions and coordinating programs that aim to "support and create school environments that cause humans to feel safe, respected and valued," she said in a statement.

The Minneapolis-based organization is boosting its outreach efforts in schools — including anti-bias training — because of what it describes as a "deteriorating atmosphere for LGBTQ youth and educators in Minnesota schools." OutFront's executive director, Monica Meyer, said those shifts are the result of "anti-LGBTQ rhetoric from certain public officials and pundits."

"We know that a safe and supportive environment can mean the world to students and fundamentally change their school experience," Meyer said. "Bringing Kelly Holstine on staff to continue that work is the next step in building the best possible school environments for all of Minnesota's youth, including, and especially, our LGBTQ students."

To read this article and more, visit the Star Tribune website.