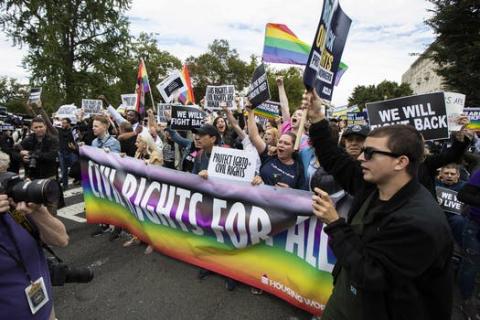 By Patrick Condon and Brooks Johnson

Advocates for gay and transgender workers in Minnesota say that Monday's U.S. Supreme Court ruling extending legal protections to LGBT people is a boost even though the state already protects employees from being fired over sexual orientation.

The high court's decision is a landmark win for Minnesota activists who felt their rights could still be limited in the state without a federal ruling.

"A lot of people who are discriminated against don't know they have any recourse, so they don't seek it out, and cases aren't reported or rectified," said Jacob Thomas, spokesman for OutFront Minnesota, an LGBT rights group. "A U.S. Supreme Court [ruling] helps everyone understand this kind of discrimination is not OK and in fact is illegal."

The high court ruled 6-3 that the 1964 Civil Rights Act's workplace protections cover LGBT employees. The lopsided nature of the Supreme Court ruling, with two Republican-appointed justices siding with the court's four liberals, was a blow to culturally conservative forces that have sought to limit LGBT protections.

John Helmberger, the CEO of the Minnesota Family Council, said the court was wrong to attach the Civil Right Act's workplace protections for sex to gender identity, arguing that jurists are "defining sex into near-nonexistence."

"Our work to protect the religious freedoms of all Minnesotans, as well as to stand for the reality and importance of biological sex, is now more crucial than ever," Helmberger said.

Pro-LGBT activist groups said the court's ruling, though it explicitly applies to workplace discrimination, would give them more grounds to push back against discrimination in other walks of life.

"It's the court deciding a more expansive definition of sex," said Jess Braverman, legal director for St. Paul-based Gender Justice, a nonprofit that works for gender equity in the law.

Braverman said an example is a new regulation announced Friday by the Trump administration to erase protections for transgender patients against discrimination by doctors, hospitals and insurance companies.

"I believe the effect of this is to basically moot that rule," Braverman said.

"This decision is a major victory in our fight for equality," said Craig, the first LGBT person elected to Congress from Minnesota.

Prominent Minnesota Republicans were mostly muted in their response. U.S. Reps. Tom Emmer and Pete Stauber and U.S. Senate candidate Jason Lewis did not respond to requests for comment.

A spokesman for U.S. Rep. Jim Hagedorn of southern Minnesota offered a brief response: "He does not agree with the decision."

Hagedorn believes it's an issue for Congress and not the courts, his spokesman said.

But Tyler Kistner, the Republican running against Craig in southeastern Minnesota's Second District, praised the court's decision. He singled out Justice Neil Gorsuch, a Trump appointee who along with Chief Justice John Roberts broke with the court's conservative bloc.

"People should be judged in the workplace by their job performance," Kistner said, adding that "Justice Gorsuch got it right. Today's decision is a great step in the right direction for our country."

The ruling also means more legal avenues for those who have already brought such cases.

At the University of Minnesota Duluth, it reopens the door to a lawsuit from two former coaches who alleged workplace discrimination based on sexual orientation but were stymied in their efforts to pursue the case in state courts.

Their previously dismissed claims have been on hold at the Eighth Circuit Court of Appeals pending the outcome of the Supreme Court case that was decided Monday.

"It's clear that the big issue in our case has been decided in favor of my clients," said their attorney, Sharon Van Dyck, who said she plans to file motions to restart the case this week.

The federal suit was first filed in 2015 alongside former women's hockey coach Shannon Miller, whose case went to trial without the other coaches. She won in 2018 and settled with the university in December for $4.5 million.

Banford and Wiles' case was also brought in state court, but those proceedings ended in the university's favor after the Minnesota Supreme Court declined to hear an appeal.

Read the article on the Star Tribune's site.