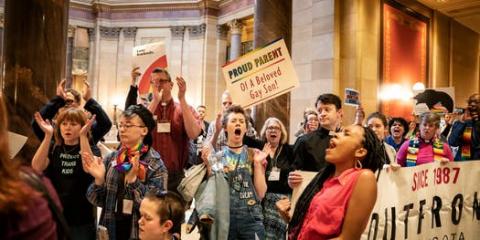 In this day and age, it is absurd to think that a ban on conversion therapy for vulnerable adults and minors is even being debated. But just last week, Minnesota lawmakers argued over a ban on therapy aimed at changing sexual orientation, and the ban did not pass (“Political is personal on gay ‘conversion,’ ” front page, May 11).

Conversion therapy has been prohibited in 14 states already; Minnesota has surprisingly not embraced this forward movement.

The American Psychiatric Association opposes conversion therapy as it is based on the assumption that homosexuality is inherently wrong and needs to be corrected. The advancement of conversion therapy does more harm to the individuals and helps further the narrative, with no scientific backing, that homosexuality is unethical. This is dangerous on both the individual and societal level.

As Genna Gazelka (who was sent as a teen to a therapist opposed to gay relationships) stated in the article, conversion therapy “is harassment, and it is tantamount to what could be said of torture or sexual torture.” This should not be an issue that legislators are arguing — these are people’s lives and they should be allowed to live in their own skin, embracing who they really are.

Find this letter and more on the Star Tribune website.