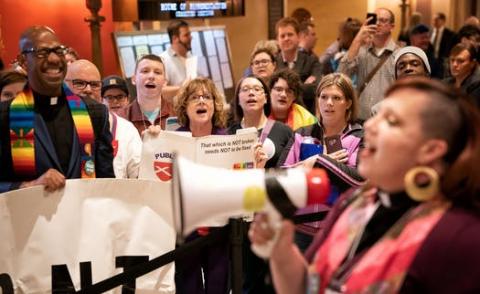 A united St. Paul City Council approved a ban Wednesday on conversion therapy for minors, a widely discredited practice that seeks to change a person’s sexual identity or gender expression.

The council heard unanimous support for the ban from advocates, mental health professionals and a survivor of conversion therapy at a remote public hearing earlier in the day. Those who testified described the long-term repercussions that conversion therapy can cause, including depression, substance abuse and suicidal thoughts.

“When professional therapists tell young people that something is fundamentally wrong with who they are, that causes significant harm,” said Monica Meyer, executive director at OutFront Minnesota, which has also advocated for a statewide ban. “We know that our cities can take a stand and really fight back against this harmful practice.”

Multiple council members said Wednesday that they would support a statewide ban.

Michelle Bahr, a Shakopee therapist and mother of a gay son who testified Wednesday, called conversion therapy “a form of child abuse.” Andy Johnson, an associate professor of psychology at Bethel University, said banning the practice “is a matter of putting an end to mental health malpractice.”

Jory Miller, a survivor of conversion therapy, described the experience as “psychological torture.”

It’s unclear how many conversion-therapy practices exist in St. Paul, though several have been confirmed in the metro area, according to Jacob Thomas, communications and brand manager for OutFront.

The St. Paul ordinance, which was introduced in March but delayed because of the coronavirus pandemic, would prohibit licensed medical and mental health professionals from practicing conversion therapy on anyone under age 18.

Enforcement would fall to the city’s Human Rights and Equal Economic Opportunity Department, and violations would incur fines of up to $1,000.

“It really has been a long time coming,” Council Member Mitra Jalali said before the council vote. “We just need to send a strong message — and we’re not just sending a message, we’re actually banning this harmful practice.”

Read the article on the Star Tribune's website here.