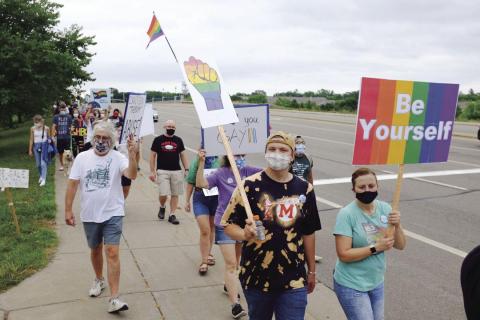 Robbinsdale businesses or organizations that practice or host gay conversion therapy events will likely face financial penalties in 2021. The Robbinsdale City Council’s first matter of new business this year was the first reading of a conversion therapy ban, which passed unanimously at the Jan. 5 meeting.

Residents, in support of protections for LGBT individuals, have pressured the City Council and Human Rights Commission to pass an ordinance banning the practice. The organizers of Birdtown Pride, an advocacy group that organizes protests at Robbinsdale conversion therapy events, hoped to have an ordinance finalized with the city by January.

What is conversion therapy?

Conversion therapy, sometimes called reparative therapy, attempts to change the sexual orientation of its subject. Many institutions, including the American Psychiatric Association, have discredited the practice. In 2018, the APA reiterated that the therapy “represent[s] a significant risk of harm by subjecting individuals to forms of treatment which have not been scientifically validated and by undermining self-esteem when sexual orientation fails to change.”

The practice has been banned in 20 U.S. states but has failed to pass in the Minnesota Legislature. As a result, cities like Rochester, Minneapolis, Golden Valley and Winona have opted to adopt local measures.

Councilmember Tyler Kline estimated that Robbinsdale was the eighth city in the state to pass a measure opposing the practice.

City Attorney Andrew Biggerstaff wrote the ordinance using ordinances from other cities as a framework, with direction from the City Council in a November work session and the Human Rights Commission. The ordinance prohibits the practice of conversion therapy on minors and vulnerable adults. The ban only applies to providers such as licensed mental health professionals, with an exception for “members of the clergy who are acting in their roles as clergy, or pastoral counselors and providing religious counseling to congregants.”

If a licensed provider is found to be in violation of the ordinance, they will be cited with a $400 fine. Other offenses that are charged at that level are the excessive accumulation of garbage on a property, violation of a conditional use permit, or a fourth nuisance call to a single property in two years. Each day the violation exists is grounds for a separate citation. Continued violations would result in a doubling of fees, for a maximum of $2,000.

The Human Rights Commission had previously recommended violations for conversion therapy hosts begin at $950. Another recommendation that the commission be informed of alleged violation complaints was removed from the ordinance due to privacy concerns. Councilmember Sheila Webb, a former Human Rights Commissioner, asked Biggerstaff if there was a way to keep the commission aware of complaints without sacrificing the confidentiality of the minor or vulnerable adult in question.

Biggerstaff responded that while it was appropriate for the advisory commission to bring forward and advocate for the conversion therapy ban, it was not typical for them to be involved in enforcement.

Mayor Bill Blonigan said the commission members shouldn’t feel discouraged by having that portion struck from the ordinance, especially considering the steep penalty given to first-time offenders.

“I don’t think there will be tons of these cases coming up, but it’s important that the ones that do come up–whether it’d be next month or six years from now–that we do have an ordinance,” he said. “There is no scientific basis for conversion therapy and I’m happy we’re ending the harmful effects of something that has no basis in science.”

The proposed ordinance goes farther than action taken last March by the Golden Valley City Council. The council issued a proclamation opposing the practice of conversion therapy, but did not place an outright ban with tangible penalties. The city encourages residents to anonymously report suspected instances of conversion therapy, and the reports are documented and forwarded to the Minnesota State Legislature.

Reports are not investigated by the city. In the proclamation, the Golden Valley City Council formally encouraged the state to pass legislation.

In August, a Robbinsdale church hosted a seminar some believed was a conversion therapy event. The seminar, titled “Distinctions: Discovering Biblical clarity in a sexually-confused world,” was delivered by Outpost Ministries, a faith-based public speaking organization. The seminar was opened to parents and teens, as well as pastors and adults.

A protest was organized by the citizen group Birdtown Pride, and aided by LGBTQ rights nonprofit OutFront Minnesota to oppose the programming and show support for seminar participants. The protest caused the event to be streamed online, though keynote speakers appeared to deliver their addresses from the church.

If adopted, the ordinance would likely not apply to events like this, unless it was proven that the seminar included guidance by a licensed mental health professional.

A second reading of the ordinance will require approval at an upcoming meeting.

Read this article on the Sun Post's site.