'Teacher of the Year' was nervous to kneel during anthem at college football championship: 'My leg was shaking'

A “Teacher of the Year” who skipped last year’s White House awards ceremony to support marginalized communities, kneeled during the national anthem at a college football game with President Donald Trump and Melania Trump.

Kelly Holstine, 46, Minnesota’s 2018 Teacher of the Year and the director of educational equity at OutFront Minnesota, an LGBT+ civil rights group, attended the College Football Playoff National Championship on Monday in New Orleans. Before the Louisiana State University-Clemson University game at the Mercedes-Benz Superdome, the first couple took the field amid chants of “USA, USA” and “Four more years!”

The former English teacher from Shakopee, Minn., who was the first openly-gay teacher to receive the award, lined up for the national anthem with her colleagues, only 15 feet from the president and the first lady. As singer Lauren Daigle performed, Holstine took a knee.

“We were told that putting our hand over our hearts during the national anthem was optional, but that wasn’t enough for me,” Holstine tells Yahoo Lifestyle. “Kneeling is a way to show respect for the military and our country, while also supporting oppressed and marginalized humans.”

Holstine considered Colin Kaepernick, who in 2016, sat during the national anthem to protest police brutality against people of color, and then kneeled during other games. The controversial demonstration inspired professional and amateur athletes to do the same. In 2017, Kaepernick opted out of his contract and has not been rehired in the National Football League. Also top of mind was Dr. Martin Luther King Jr., whose legacy is celebrated annually on January 20.

Honored as State Teachers of the Year at NCAA Champ FB Game. Given platform to stand up for marginalized and oppressed people. Like many before, I respectfully kneeled during Nat’l Anthem because, “No one is free until we are all free” (MLK). #imwithkap #blacklivesmatter #LGBTQ pic.twitter.com/DimP3pBtBn

“When I heard thousands of people chant ‘USA,’ I felt it in my chest,” Holstine tells Yahoo Lifestyle. “It seemed as though they were chanting for a different belief system than the one I hold.”

Although Holstine’s supervisor at work, her wife, and her friends had her back, on the field, she was conscious of her physical safety. “But then I thought about people who don’t have a choice — teens beaten up for being LGBTQ, children in cages or refugees,” she tells Yahoo Lifestyle. “I can’t decide to be comfortable when there’s an opportunity to continue conversations that started long before me.”

"Teacher of the Year" Kelly Holstine kneeled during the National Anthem at the College Football Playoff National Championship game on January 13, with President and Melania Trump in attendance. (Photo: Getty Images) 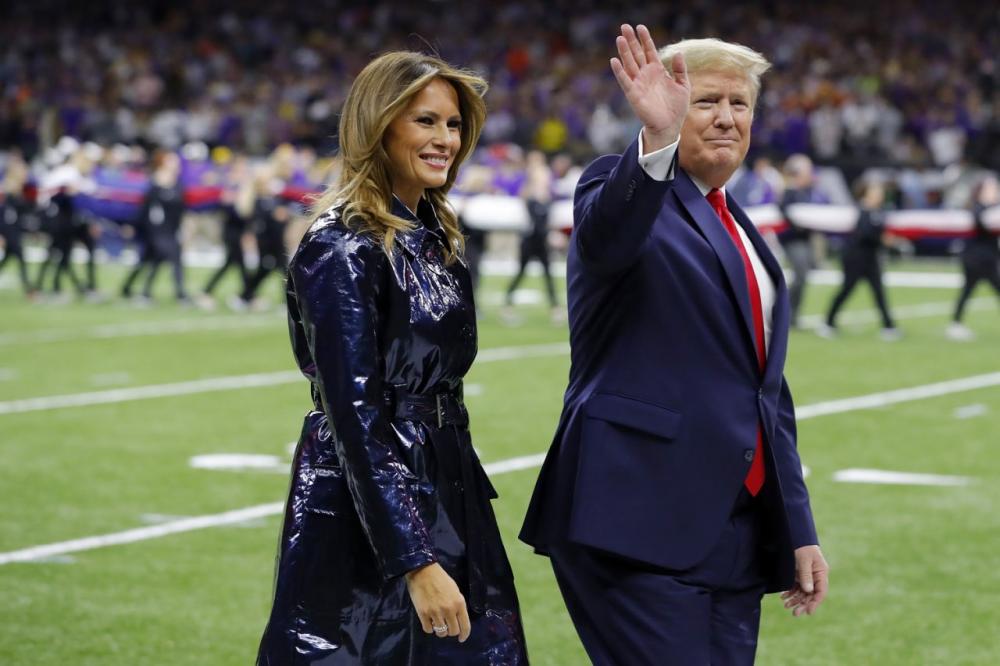 “I feel honored to follow in their footsteps,” she adds. “There is so much hatred [in the world] and disrespect. If I can stand up for people, I will.”

Holstine admits, “But my leg was shaking the entire time.” However, during her silent protest, the president and first lady were making their way further down the field. “The attention had shifted by that point.”

On Monday, Holstine tweeted, “Honored as State Teachers of the Year at NCAA Champ FB Game. Given platform to stand up for marginalized and oppressed people....” which was retweeted by Kaepernick himself.

Holstine, who shared her plan with her peers before the game, says that all freedom of expressions are respectable, whether it's people choosing to stand or those who “strongly considered” taking a knee.

In April, Holstine and Kentucky’s 2019 Teacher of the Year Jessica Dueñas skipped a White House ceremony with Secretary of Education Betsy DeVos and Vice President Mike Pence, as well as a photo opportunity with President Trump. “As a gender-nonconforming lesbian,” Holstine told Yahoo Lifestyle at the time, “the policies of the Trump administration have been hateful, and I see the painful impact in my students.”