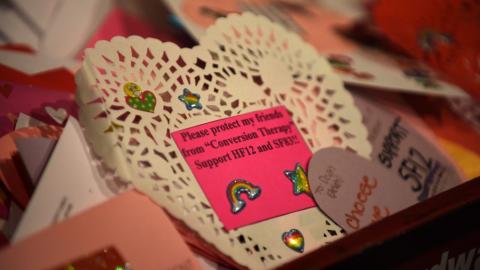 For both a ban on so-called gay “conversion therapy” and a measure to allow two married women to have the same parental rights as a man-woman married couple failed to gain enough support in the Republican-majority Senate to reach the desk of Gov. Tim Walz.

Democrats, who hold the majority in the House, approved the ban, but it was voted down in the Republican-controlled Senate on a party-line vote. The issue became more personal for some lawmakers after it was reported that Senate Majority Leader Paul Gazelka, R-Nisswa, had sent his own child, who came out as lesbian as a teen and now identifies as bi-gender, to a therapist who opposes same-sex relationships.

Half of the married gay women in Minnesota are forced to adopt their own children under Minnesota law. Even though gay marriage became legal in Minnesota in 2013, a host of gender-specific terms remain in statutes. A bill known as “Logan’s Law” after a St. Paul child of two women passed the House but never reached a vote in the Senate and was ultimately not included in the final plan approved by lawmakers.