Washington Blade: Activists around the country back protests against police brutality 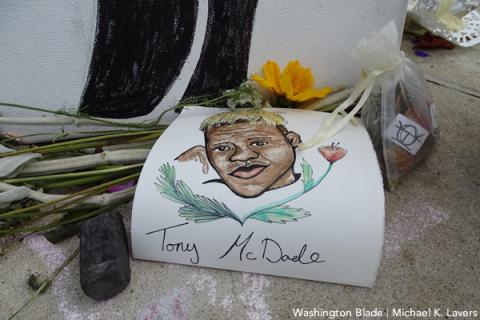 Activists around the country continue to stand in solidarity with those who are protesting against police brutality in the wake of George Floyd’s death.

Tremaine Jones is the project director of the Freedom Fund, an organization based in Fort Lauderdale, Fla., that helps LGBTQ inmates and detained immigrants post bail. Jones also identifies as a Black queer man.

Jones on June 1 told the Washington Blade during a telephone interview he supports those who have taken to the streets to protest Floyd’s death, noting “people are tired of Black bodies and Black lives being exploited and killed.” Jones added technology has also allowed passersby to document incidents of police brutality as they happen.

“As a Black queer man I have to navigate thinking about this everyday,” said Jones.

Minneapolis City Council Vice President Andrea Jenkins — the first openly transgender woman of color elected to public office in the U.S. — represents the area in which Floyd was killed.

Jenkins acknowledged during a June 3 virtual town hall moderated by Equality Florida CEO Nadine Smith that the area of Minneapolis she represents is “a community in pain.” Jenkins added, however, the outrage over Floyd’s death has already brought about change.

“Last Monday George Floyd was murdered; (the next day) four officers were fired; three days later the murder was charged and arrested,” said Jenkins. “(Chauvin)’s still in jail. He’s not out on bail. He’s still in custody.”

Jenkins during the town hall also noted the Minnesota Department of Human Rights has filed a civil rights complaint against the Minneapolis Police Department that “really allows us” an “opportunity to undo some of the structural themes that are holding up this racism in our society.” Jenkins is one of the nine Minneapolis City Council members who support “dismantling” the department in the wake of Floyd’s death.

Georgia authorities in May charged McMichael and his father, Gregory McMichael, with felony murder and aggravated assault after a video of the Feb. 23 shooting in the city’s Satilla Shores neighborhood became public. William “Roddie” Bryan Jr., the white man who recorded the shooting on his cell phone, faces charges of felony murder and criminal attempt to commit false imprisonment.

Reports indicate Travis McMichael used a racial slur to describe Arbery after he killed him.

A white police officer in Tallahassee, Fla., on May 27 shot and killed Tony McDade, who was a Black trans man.

Janel Diaz, a Black trans woman who is a member of the Tallahassee Mayor’s LGBTQ+ Advisory Council, on Tuesday told the Blade during a telephone interview that LGBTQ people in her city remain divided over McDade, in part, because he allegedly stabbed someone to death before he was killed. Diaz nevertheless acknowledged McDade’s death has become part of the broader protest movement against police brutality.

“We don’t know what took place,” Diaz told the Blade. “He’s not here to speak for himself … what I can take away from all of this is it’s bringing about hopefully some sort of change within our community and hopefully this can bring the divide that we have amongst communities together.”

Smith acknowledged McDade and Arbery in the virtual town hall she moderated.

“When we began to envision this panel weeks ago, George Floyd was alive in Minneapolis, Tony McDade had not been shot by police in Tallahassee,” said Smith in her opening remarks. “We began the planning in the aftermath of Ahmaud Arbery’s killing by white vigilantes just two hours over the Florida border.”

Smith said she and others who organized the town hall “wanted to draw attention and outrage to the epidemic of Black transgender women being murdered.” Smith later acknowledged June is Pride month.

Diaz also acknowledged Pride month when she spoke with the Blade.

The town hall that Smith moderated took place two days after a group of men at a convenience store in St. Paul, Minn., punched and kicked Iyanna Dior, a 21-year-old trans woman in an attack that was recorded and posted to social media.

OutFront Minnesota, a statewide LGBTQ advocacy group, in a statement that condemned the attack noted LGBTQ people “face higher rates of violence than their straight and cisgender peers” and added these rates “drastically increase for BIPOC (Black, indigenous, people of color) LGBTQ+ communities.”

The organization noted “the vast majority” of the 26 trans people who were reported killed in the U.S. in 2019 were Black trans women. OutFront Minnesota in its statement also referenced McDade.

“Black trans women are attacked far too often across Minnesota,” said the organization. “It is an epidemic and it must be stopped. No one should have to live in fear of violence because of who they are.”

Local media reports indicate the shooting took place shortly after McDade fatally stabbed a 21-year-old man. The Tallahassee Police Department has said McDade pointed a handgun at the officer, who has not been publicly identified, but an eyewitness to the shooting has questioned this account.

Black Lives Matter protesters in Asheville, N.C., honored McDade with a makeshift memorial they placed near a monument to Zebulon Vance, a former Confederate Army officer who became North Carolina’s governor and a U.S. senator after the Civil War.

Then-South Carolina Gov. Nikki Haley in 2015 ordered the removal of the Confederate flag from the state house’s grounds after a gunman killed nine people inside the Emanuel African Methodist Church in Charleston. A statue of former U.S. Sen. Strom Thurmond (R-S.C.), who opposed efforts to end racial segregation, remains in place.

Jenkins also acknowledged Dior, noting she was “brutally beaten in this community by Black cis men.”

“Our work, our struggle is real,” she said during the Equality Florida town hall. “It’s very real and being at these intersections … this is one space where maybe this is a recognized reality.”

Monica Roberts, a Black trans woman and activist who lives in Houston, sought to highlight these intersections when she spoke with the Blade on Tuesday. Roberts in her statement also acknowledged McDade.

“It’s disgustingly sad that it took another murder of a Black man to wake the rest of America to the fact that police departments across the nation are murdering us,” said Roberts. “Those murders by cop include Tony McDade, a trans man in Tallahassee, Fla. They are also a reminder that when my human rights aren’t secure, your human rights aren’t either.”

Roberts spoke with the Blade shortly before Floyd was buried next to his mother at a Houston cemetery.

Read this article on the Washington Blade's website here.